Narcotics Anonymous (NA) groups are world-famous support groups for those who have drug addictions. You may have heard of them yourself, especially if you have the same struggle. A concerned family member may have told you about it. You could even know someone who has benefitted from it. And you could be thinking about joining one yourself.

But as with any addiction recovery method, you might be concerned how much NA would cost you. You might be hesitating to join, especially if you don’t know much about it and the associated expenses.

Before addressing the cost, let’s first look at what NA is.

What is Narcotics Anonymous?

NA groups are composed of people who are experiencing drug addiction problems. It is a kind of support group – a community of people with a common goal, which is to live a drug-free lifestyle.

Many members of NA also experience many negative things in their lives as a result of their addictions. These include:

During NA meetings, members share experiences with each other, and everyone learns from everyone else. A key hallmark of NA is the so-called 12 steps, which every member is encouraged to practice to achieve a sober life. These steps are:

Why is it “anonymous”?

NA groups do not keep membership records. Also, you don’t have to reveal your whole identity to the group. All you need to let others know is your first name and your experiences related to drug addiction.

NA has a policy of keeping everything within the group only. Everything you and your fellow members share stays inside NA.

What happens during NA meetings? 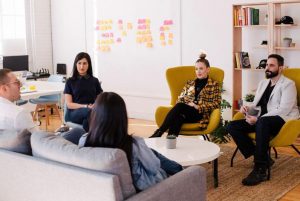 Essentially, NA meetings are mostly about sharing your experiences with other members of the group. Everyone will have a chance to say something in every meeting. Also, facilitators will introduce you to the twelve steps, the philosophy behind NA, and how to achieve a sober lifestyle by following those twelve steps.

In NA, everyone is discouraged from giving advice to each other. You are not there to fix other members’ problems, after all. All of you are there to reach one goal, and that is to achieve lives free from the influence of drugs.

What if there are people I know in my NA group?

It’s okay if you see people you know in the group. NA has a policy of not revealing members’ identities, so you still stay hidden. That’s where the “anonymous” part comes in.

It’s also important to note that those people are in the group for the same reason as you are. They also want to recover from drug addiction. So, they have no incentive to tell you off.

I’ve heard that NA is a religious group 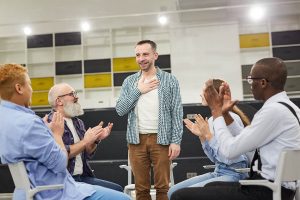 NA meetings tackle a lot of ideas about God or a higher power. But NA isn’t associated with any particular religion, and you don’t have to be religious to join. All you need is a genuine desire to quit drugs. Many atheists have actually benefited from NA, and they have successfully transitioned to living sober.

It’s a fact that the founder of NA believes in God. However, everyone is welcome in any NA group. If you’re not affiliated with any faith, you could think of the “higher power” as the group itself. They won’t force you to believe in God, so don’t let these elements discourage you from joining.

Does NA do formal treatments?

Unfortunately, NA is not a rehab provider. The facilitators are not trained doctors or mental health professionals. So, if you need medications, therapies, and other treatments, NA cannot provide them to you. You need to consult professionals if you need these.

But what if you’re going through formal rehab? Can you still join NA meetings?

Yes, you can. In fact, some rehabs include NA as part of their programs. With that, you get both the benefits of NA and evidence-based treatments.

Now that you have the answers to many common questions about NA, let’s go to that big question from the very beginning. 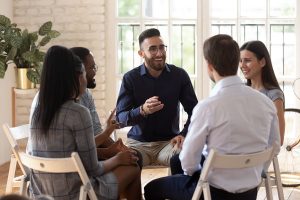 The good news for you is yes! NA is absolutely free. There are no membership fees, so you can join even if your finances are really tight. The only expenses would be transportation to and from the meeting place.

Be aware, though, that many NA groups may collect donations from members. These would cover things like rent, electricity, administrative costs, and food (if your NA group serves food every meeting). It’s normal if you see facilitators pass around a hat or a basket during the meeting for donations.

You are not required to give, though. You should only donate if you have the extra money. But if you’re feeling generous, you can give as much as you can. Donations are a big help to keep the meetings running.

NA is a non-profit organization run by donations from its members. Some groups have wealthy sponsors as well. These are what allow NA to continue operating all around the world.