Vodka is an alcoholic beverage that’s popular in many countries, including Russia, Ukraine, Belarus, Latvia, Estonia, Poland, Norway, Finland, and Iceland. It is also sold in the US.

As an alcoholic beverage, taking vodka can make you drunk. The question is how much vodka does it take to make you intoxicated? Let’s find out.

What is vodka made of? 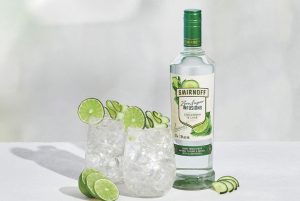 Vodka can be made from different starting materials such as potatoes, fruits, corn, grapes, grains, and sugar. They are first fermented, then distilled, and finally filtered.

How much alcohol is in vodka?

There are various formulations of vodka, each having different levels of alcohol. Typically, vodka has about 35 to 40 percent alcohol by volume. In some variants, though, the alcohol content can be as high as 95 percent.

How many shots of vodka can I take before getting drunk? 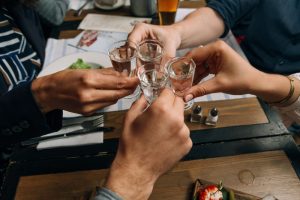 There is no hard and fast rule on the number of shots you have to take before getting drunk. Actually, even “drunk” is vague in itself – you can be anywhere from mildly drunk (tipsy) to dead drunk (flat on the floor and unconscious).

Also, you would get drunk faster if you take vodka on an empty stomach. Since there’s nothing for the stomach to digest, it will absorb the alcohol faster and distribute it to your bloodstream. In turn, you’ll feel the effects faster than if you drink it while eating.

In the latter case, your stomach will be more focused on digesting the food. That way, the alcohol won’t be absorbed into the bloodstream as quickly. So, eating while taking vodka shots is one way of delaying those drunken or tipsy feelings.

Different people have different levels of tolerance for alcohol. This depends on some factors like:

Why do I get drunk with vodka?

When you get intoxicated, you will also feel flushed and sweaty, and you will urinate more frequently.

Additionally, alcohol can also promote the release of serotonin and dopamine – two brain chemicals involved in feelings of pleasure and reward. That’s why you can also feel happy and relaxed when drinking vodka.

Why do I get a hangover?

When you drink excess alcohol, you are likely to get a hangover the next day. A number of things cause it, including:

How would I know how much alcohol is in my body? 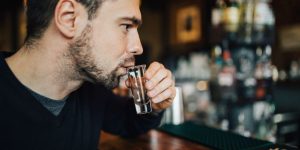 There is a way to determine your blood alcohol concentration (BAC), or the amount of alcohol present in your body. You can do this through a breathalyzer test, which is often used by police officers to check for drunk driving. You can get one without having to approach the cops, though.

Generally, starting from 3% BAC, your driving skills will begin to be affected. You may be caught and charged with DUI (driving under the influence of alcohol) when your breathalyzer test is at this level or higher.

BACs of 30% or higher are fatal. People rarely reach this level, but it’s still possible, especially for very heavy drinkers.

How do I avoid getting drunk from vodka?

The key to avoiding intoxication is drinking moderately. The Dietary Guidelines for Americans define moderate as drinking up to 1 drink per day for women or 2 drinks per day for men. One drink is defined as 0.6 ounces of pure alcohol; in terms of vodka, which is typically 40% alcohol, that is 1.5 fluid ounces of the beverage.